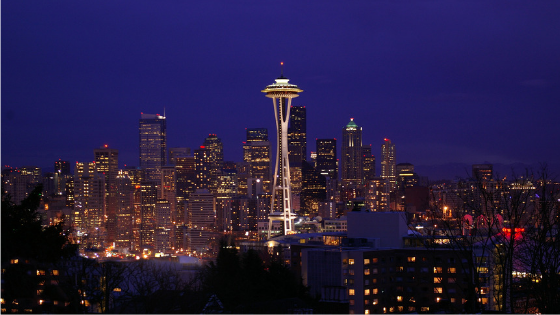 Seattle: One of The Top Airbnb Cities

Seattle: One of The Top Airbnb Cities

A handful of large cities in the United States boost the highest number of Airbnb listings and occupancy rates, and Seattle is one of them, according to Mashvisor. The northwest city is in good company with major metropolitan areas such as San Diego, San Francisco, Los Angeles, New York, and Chicago. Seattle and the surrounding areas feature about 8,000 listings and a nearly 69% average occupancy rate.

Popular City for Tourism and Business

Seattle is a popular spot these days for both residents and visitors. The area offers a lively arts and cultural community with plenty of museums, entertainment, historic sites, nightlife and outdoor spaces. Popular attractions include Pike Place Market, the Space Needle, and the Chihuly Garden and Glass Museum, along with a myriad of other places to visit and enjoy.

Quaint, unique neighborhoods invite people to relocate as well as visit for a taste of the local scene. You can find hundreds of antique shops, bistros, and ethnic businesses to frequent while you're in town.

The Emerald City is also home to eight Fortune 500 companies including well-known businesses such as Amazon, Microsoft, and Costco as well as many other large and innovative start-ups. That means a fair amount of travelers come into Seattle for business purposes as well as for tourism.

In fact, the city broke its record for number of visitors in 2018, with a more than 2 percent increase in those visitors who spent at least one night in Seattle.

In 2017 Seattle approved a new Seattle Airbnb legislation, which limits short-term rentals to 2 units per host. However, the new set of regulations don’t limit all hosts to two units. There are some exceptions for short-term rentals legally operated before September 2017 (please make sure to review the laws here). Also, starting in 2019, Seattle launched an online registration system for Airbnb rentals.

Airbnb Supply and Demand in Seattle

According to Seattle Airbnb management companies, Airbnb owners in Seattle experience the typical summer peak with bookings high between June and September. Winter bookings tend to be half of peak-season traffic. Most Seattle vacation rental owners have been in the business for a while, usually with more than a dozen reviews per listing, and roughly 40 percent of rentals are booked for an average of 172 nights annually.

Moving forward, the city expects further growth as demand for tourism, business, and residential space continues to climb. The city is still building and expanding venues to accommodate this demand, which means demand for short-term rentals will continue to increase. Making a Seattle Airbnb investment now may generate significant returns in the near future.

Professional Seattle Airbnb management companies make day-to-day management of short-term rental properties simple for a small fee. As a Seattle property owner, you can simply make the investment and enjoy the returns from this popular and growing market.

LOOKING FOR AN AIRBNB MANAGEMENT COMPANY TO HELP YOU WITH YOUR SEATTLE VACATION RENTAL? LOOK NO FURTHER!

Older Post Why Seattle Makes a Great Airbnb Investment
Newer Post 8 Airbnb Nightmares and How To Avoid Them ?
Back to Top
info@airconcierge.net